Learn Burmese wherever you are!

Start learning Burmese today. Download the Burmese-English audio files and learn while jogging, exercising, commuting, cooking or sleeping. The MP3 files can be copied to your smartphone or your iPad (via iTunes). 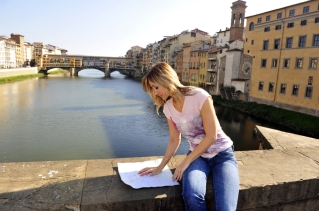 Burmese belongs to the Sino-Tibetan language family. Burmese is considered by many to be a very pleasant language to listen to. The 'Listen and Learn' MP3 audio course is a fast way to learn Burmese. 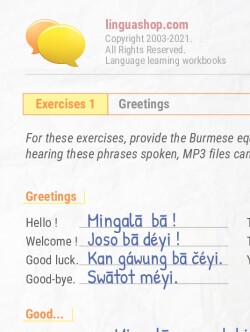 More than 20 pages of exercises in English and Burmese to help you learn the most important words and phrases in the language. We suggest printing out the Burmese exercise book and working through the exercises with a pen or pencil. This time-proven learning method is a refreshing choice in this digital age. This learn Burmese workbook includes 1000's of words and phrases in Burmese.

In the previous steps, we taught you áyin, áyin dit lon and áyin (house, a house, the house). You also learned áyindwē (houses, the houses). In this step, we discuss Burmese demonstrative pronouns so you can form phrases such as ī áyin and tō áyin (this house, that house). You'll see an easy to follow lesson which includes numerous useful examples in both Burmese and English. To get started with step 1, simply click the 9-step speedometer symbol. Or you can move ahead to step 7, by clicking the Next Step button (Burmese adjectives). 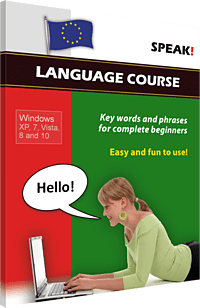 Learn Burmese now. You'll begin with simple Burmese phrases and day to day vocabulary and advance at your own pace... seeing, listening and responding in Burmese. Fun to use and also fun to learn! We are one of the few companies in the world offering a comprehensive Burmese language course for Windows. If you have a Windows laptop, this will be an excellent way for you to learn Burmese.